Solapur, even though is a district in Maharashtra state, it happens to a gate way to other states, because it shares its boarders with two other neighboring states; Karnataka and Andhra Pradesh. Which is why itself, Solapur is the home not only for Marathis, but also for Kannadigas, Gujaratis and Andhraits and it gifts a mixed culture of all these states to Solapur.  This bended culture of different stats makes Solapur a great city, not only to visit, but also to live and work for people of all community and culture. Therefore, many people from the neighboring states migrate to Solapur for new career and business ventures.

The secret of the successful conversion of Solapur from a small town to a full-fledged commercial and tourist hub is nothing but the hard work of people here. Solapur inhabitants are generally warm, tolerant and extremely enduring. The multilingual, multi-culture, multi-art, multi-folklore, multi-industrial and multifaceted features of Solapur are a proof of it. The unique culture of Solapur taught people to coexist within themselves and the attitude of people brought prosperity to the city. 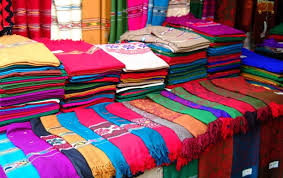 The main occupation of local people in Solapur is agriculture. Cotton textile is also an important area that many people are engaged in to find out their livelihood. You can see several cotton mills and factories in the district. Solapuri chaddars (the bedding accessories) and towels are famous world wide due to its unique designs and quality. The people, who belong to Padmashali community mainly involve in weaving occupation for their livelihood. The localities like Pandharpur, Tuljapur, Gangapur and Akkalkot home many small and medium scale industrial houses that have been seen here for years.

Bidriware, Mashru and Himroo crafts are the most famous crafts of Solapur among which the later two crafts are fabrics that are made of silk and cotton. Solapur and its surrounding areas are famous for bed-sheets and towels that have novel designs and durability.

The food culture in Solapur is a mix of different states. Apart from the very obvious Marathi cuisine one can find ample of Gujrati and South Indian food. This is mainly because, the city culture is heavily infused with the bordering states Karnataka and Andhra Pradesh. Other than this, with modern lifestyles and fast food culture seeped in, you can find the young population more attracted towards the International cuisines like Chinese, Italian etc. and they very well have multiple joints to relish.

Solapur is the land of saints and Martyrs. Siddeshwara temple is the famous temple in Solapur, which was built in the name of a spiritual leader, Siddarama, who came here at around 12th century. Siddeshwara is considered as a Gramadevata (Diety of the village) of Solapur and Siddeshwara temple is a symbol of devotion in the city. Tulajapura and Pandarpura are the other famous shrines here. Solapur also homes several Jain temples, mosques, gurudwaras and Samadhis of spiritual leaders all of which are popular pilgrim places. In short, Solapur can be called as a holy city due to the presence of numerous temples and other pilgrim spots. 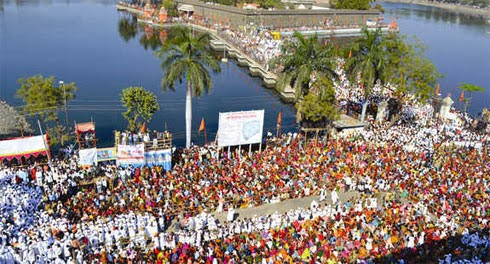 Festivals and Fairs in Solapur

Festivals have great importance in the culture of Solapur. Numerous fairs and festivals organized in this region show that people of Solapur love festivals and festivities and the religious people in the area are proud of belonging to this land of temple. Most of the festivals, which are celebrated enthusiastically, last for couple of days.

Siddheswar festival, which is one of the most important festivals in Solapur, becomes a part of the culture of this land. This festival is held in the month of January every year. While most of the festivals last for a few days, it takes a complete month. However, the three days in this one month of festivities are more special. The day before Makarsankranthi is known as the "wedding of sticks" in local culture. There is a huge celebration on the day of Makarasankranthi and people of Solapur can be seen firing fireworks on the day after the festival.

Art and Literature in Solapur

Marathi is the spoken language in Solapur. But, most of the people here are familiar with Hindi, Gujarati and some South Indian languages. The place has gifted many versatile writers, classical singers and poets to the world. Solapur homes numerous movie theatres and folklore institutes, which shows how much the locals love entertainment and arts. The festivals and festivities of Solapur are not completed without traditional dances like Lavani and Dhangari Gaja. It is sure that a visit to this city is the only way to sail to the depth of unique and wonderful Solapur culture.