Fort of Naldurg in Solapur

The fort of Naldurg, which located 45 km away from Solapur, is a famous historic monument.  There is a belief that Nalaraja (The King Nala) built this fort. It is also said that Chalukya kings of Kalyanai built Naldurg fort. The fort was earlier known as Yeral, when it is under the Bahamani Sultans from 1351 to 1480, before it was handed over to the Mughal Empire. Later the Adil Shahi rulers constructed the massive fortification wall of the fort in 1558. 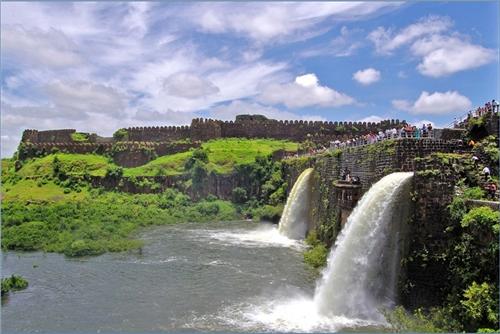 The Naldurg fort has the classic Indo-Islamic style of architecture, which is extremely unique among the bevy of forts scattered all across Maharashtra. The interior portion of the Naldurg fort is enclosed with ruined walls. The fort homes 114 bastions and a highest point called Upali Buruj. The bastions of Naldurg Fort are in different shapes like Pantagonal, Hexagonal, Semicircular, Quadrilateral or even in shape of petals of a flower. Even though the fort has several buildings, most of them are now in ruins.

The first entrance of the fort is guarded by two huge bastions at the both sides. You can also see the second entrance in between these bastions. Vestibules can be seen on the left. The third gate and the main entrance, known as ‘Hulmukh Darwaza’, lies in between the bastions of the left side. You can reach to ‘Sherhaji’ by climbing the steps at the right hand side and from here you can enjoy the beautiful view of dual fortification of the fort. The bastion at the external side of this entrance homes a few rooms or compartments that lead you to the top of the bastion. Among the three cannons inside, one is around 27 feet long. There is a building named ‘Hattikhana’ behind the cannon and you can also see a big sculpture in front of it.

‘Jama’ mosque with a water reservoir in front of it is located on one side of a palace. The special attractive bastion of this fort is located on the right side. The beauty of the construction of this bastion, which has the shape of lotus petals, is clearly enjoyed by watching from outside. The similarity of its shape to nine petals of a lotus gives this bastion a name ‘NavBuruj’. This bastion with two floors at inner side is one of the rare constructions that can be seen on Naldurg. You can also see a dilapidated building named ‘Bardari’ in between the mosque and the fortification, where British Officer Colonel Meadows used to stay. It gives the fantastic view of Bori river and the bridge over it.

You can see another fort named ‘RanMandal’ at the back side of the moat, which is built to safeguard Naldurg. There is a dam here that connects the fort and the Ranamandal, which is worth visiting. The moat around this fort is the water of Bori River. The moat is filled by changing the direction of the flow of the river. In year of Second Adilsha, a weir of 174 meter long, 2.5 to 14 meter wide and 19 meters in height was constructed that connects the Naldurg fort and the RanMandal. There is a small palace inside with steps to descend. When the river overflows, the water flows from the top of the weir and the structure inside does not get wet. The talented architect ‘Meer Emadin’ built this beautiful construction.
Another point of attraction for both tourists and researchers here is the ‘Pani Mahal’, which is the most beautiful monument constructed below water. You can watch the beautiful scene of water of ‘Bori’ river flowing down from the top of the Pani Mahal, if you stand inside of this monument. Both these two structures are built during the rule of Ibrahim Adil Shah II.

‘Upalya’, which is also called as ‘Upali Buruj’, or ‘Tehlani Buruj’, is another attraction of Naldurg fort. It is a bastion constructed at the center of the fortification of the fort is made for keeping watch. You can see the entire fort and the surrounding area from this bastion of 15 feet high with two cannons of 18 feet and 21 feet long. There is a warehouse to keep explosive material and a water house near this bastion. 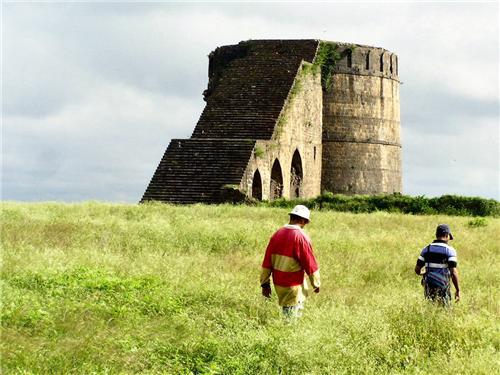 The famous attraction of Naldurg fort is its pretty waterfalls, which is commonly called as Nar and Madi that translates to male and female in the local language. The view of the waterfalls cascading down the lovely mountains in its full swell during the monsoons of post monsoon period is a mind-blowing scene.

Naldurg fort is located in Naldurg village, which is on Solapur - Hyderabad highway. You can get state trasnsport buses from Solapur to Naldurg every half an hour. Even though there is no accommodation facility on the fort, rest houses are available in Naldurg village. It takes around a day to watch the Naldurg fort and RanMandal completely.