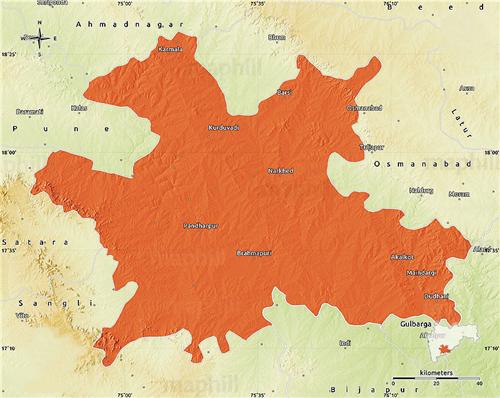 Rivers and Hills in Solapur

Bhima River and the Sina River, which flow south-east, are the two famous rivers in Solapur and the tributaries of which are the Nira River, Mann River and Bhogawati River. Among them the Nira and Mann run nearly east. Bhima River has 289 kms length in Solapur district. Around 296107 hectares of area in Solapur is under irrigation from various sources.

Solapur, which has a flat or undulating terrain in general, has no important hill system. Only some spurs of the Balghat range pass to the north of  Barshi Taluka for a few kilometers. Karmala, Madha and Malshiras have a few scattered hills. You can see the low table and small separate hills in Karmala and Madha Talukas that act as a watershed between the Bhima and Sina rivers. The soils of Solapur can be classified into three major types; black soil, coarse grey soil and reddish soil.

Central or Transitional Zone: This zone covers Mohol, Mangalwedha, Madha Taluka and eastern part of Pandharpur and is charecterised by moderate soil and uncertain rainfall. Both Rabi and Kharif crops are cultivated in this part.

Western Zone: The areas come under this zone are Karmala, Malshiras, Sangola Talukas and the western parts of Pandharpur. Shallow and poor type of soil with no moisture along with scanty and uncertain rainfall marks this zone. Kharif crops like groundnut and bajra are cultivated in Sangola and parta of Malshiras talukas, while the Pandharpur and Madha Talukas mainly contain rabi crops.

Solapur is blessed with a moderate and decent climate. Solapur falls under category of dry (Arid and semiarid) climate. The city experiences three seasons and these are summer, monsoon and winter. The months from March to May come under summer period and the maximum temperature in this period ranges from 30 to 40 degree Celsius. The warmest period in Solapur is in April and May. It was in April 1998, the highest temperature (48 degree) is recorded. Even though summer does not end until May or even mid of June, locally developed heavy thundershowers are received in May. However, being the hottest month, May is not an appropriate time for visiting Solapur, as people get irritated with the sun that shines brightly

Agro-climatically, Solapur district comes under the rain shadow area. Rainfall is scanty and uncertain here. You can experience monsoon period from the second fortnight of June to the end of September that brings rains from South –west monsoon. Even though Solapur gets an average rainfall of 545.4 mms, the scanty and non-uniform rains result in scarcity conditions in the district. It has affected the socio-economic condition of people adversely. The Ujani dam, which has been built to provide water to the drought-prone areas, could solve this situation up to a limit. Monsoons are great time to visit Solapur, as the rains wash over the heat and add a touch of freshness.

Winter in Solapur starts in November and ends in February with the temperatures occasionally dropping below 10 degree Celsius. The minimum temperature during the winter season is in January with around 9 degree Celsius. Several people visit Solapur to explore the nature and to pay homage to the innumerable religious sites here in this period.