Solapur, which is located at the border of Maharashtra and Karnataka, is well connected to all major cities of within the state and other neighboring states like Hyderabad, Aurangabad, Pune, Mumbai, Nashik, Kolhapur etc. You can see regular bus services in all these routes, which are operated by the state government and other private transport services.
Solapur has quality roads that lead to all main cities in Maharashtra and outside of the state from Solapur. As Solapur is located on Pune – Hyderabad NH9, road transportation is widely chosen by people to reach to the city. People mainly depend on roadways to travel from Solapur to other nearby cities like Tuljapur (45 km), Paranda (95 km), Pandharpur (73), Pune (274 km) and Mumbai (402 km). Solapur city is also linked with other main cities in Maharashtra like Nagpur and Aurangabad as well as other cities in nearby state like Hyderabad, Bangalore and Chennai etc by roadways. 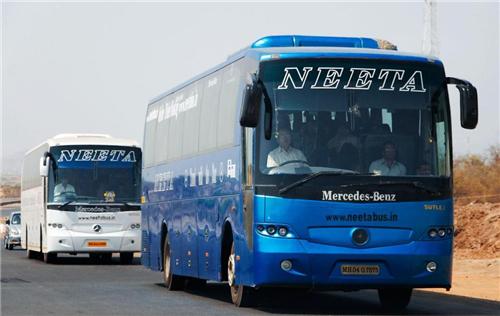 The main national highways that connect Solapur with neighboring important cities of Maharashtra and Karnataka as well as the adjoining State Capital of Hyderabad are:
You can travel to Solapur in buses owned by M.S.R.T.C (Maharashtra State Road Transport Corporation). People usually depend on these state transport services to travel between Solapur and nearby cities like Pandharpur, Karmala, Barshi, Akalkot etc. It also conducts long route services to other cities of the state like Pune, Mumbai, Ahmednagar, Aurangabad etc.

Besides, there are many private bus service providers like Bhumi Travels, Alka Tours and Travels, Neera Tours and Travels, Omkar Tours and Travels, K K Tourist Services and Om Travels etc functioning in the city that operate buses between Solapur and other famous cities. Most of these companies also offer online booking facility to the people that will be really helpful for tourists and pilgrims. You can also hire taxi to travel on these roadways that are fastest transportation option, even though expensive than bus services.

Maharashtra State Road Transport Corporation (M.S.R.T.C ) operates bus services to all important towns and cities of the districts from Solapur. You can see the bus time table is displayed at the bus stands that will help travelers who are not much familiar with the city.

Visit the page https://solapur.gov.in/htmldocs/msrtc.pdf to know the ST bus services to different nearby cities and their time details.

Bus services between Solapur and Pune
Road distance between Solapur and Pune is 264 km. The major direct buses between these two cities and are operated by Syndicate Travels Corporation, Akbar Travels, Neeta tours and Travels, VRL, Sankalp & Kareema Travels. The lowest bus face from Pune to Solapur is Rs 400 for VRL and the highest rate is Rs 1500 for Neeta Tours and Travels.

Bus services between Solapur and Aurangabad
Solapur is at a road distance of 312 km away from Aurangabad Humsafar Travels is the major bus service between these two cities. The average bus fare from Surangabad to Solapur is Rs 500.

Bus services between Solapur and Goa
State Transport bus services are available to travel from Solapur to Goa, which is about 437 km away from Solapur city at an average fare of 700.