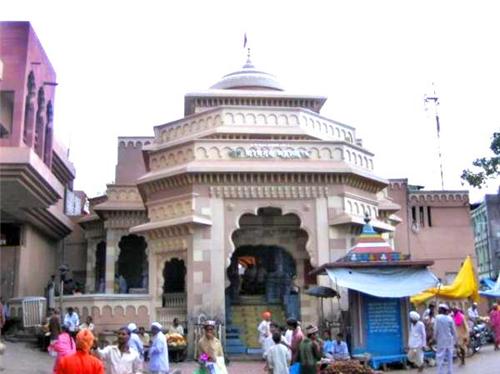 Rukmini Mandir, which is another main attraction of Pandharpur, is a famous pilgrim location in the district of Solapur. The lofty walls and massive towers of this temple are considered as a landmark that signifies the importance of this shrine. Rukmini Mandir, which is one of the chief deities of Pandharpur, is dedicated to Goddess Rukmini and is located on the banks of Chandra Bhaga River. The other common name of this temple is Panduranga Temple. This temple, which resides in the main Vitthal Temple of Pandharpur, is situated on a high platform and pilgrims enter to the temple through Namdev Gate, which is characterized by a plight of 12 steps.

Even though Rukmini is the wife of Lord Krishna, she is not found with her husband in this shrine. The legend behind is that Rukmini is doing her penance and therefore she is depicted alone in her temple. Earlier the temple had only a small shrine and portico. But, later an antarala, mandap and sabhamandap were added to the present structures.

If you enter Rukmini Temple by climbing the steps, you can see the ‘Rahi and Sathyabhama’ temples that have beautiful and attractive idols. There are main four parts for Rukmini Temple. They are;
The doors of the bedrooms are covered by silver sheet and you can see silver cot and silver velvet bed in the room. The beautiful idol of Shri Rukmini is standing in the sanctuary facing towards east with her hands on the waist. The idol of Goddess with a cheerful face makes the pious people happy. After worshiping, you can go to the back side of the temple, where you take the darshan of the peak. From there, you enter to the Sabha mandap, which has been artificially built by red stone recently. You can see several pictures of Goddess Rukmini based on her wedding story, which is the beautiful attraction of this temple.

Several religious programs are held in Sabhamandap during the four months from July to October. Goddess Rukmini is worshiped daily in different ways in these days and the Sabhamandap is decorated beautifully with various blossoms of flowers.

If you come upwards, you can see many small rooms where small idols of Hindu Gods and Goddesses reside. There is a door at the end of this space, which leads to ‘Solkhambhi’. This space homes several inscriptions. People rub their back on this inscription, as they believe that they can be freed from human life by doing so. You can again take darshan of Lord Vitthal from ‘Solkhambhi’.

After darshan, people come in ‘Mahadwar’ where small temples of Shri Kalbhairavnath, Shri Shakambari and next Shri Kahobaraya are located. There is also a newly constructed Shri saint Narahari Sonar Temple in front of Kanhobaraya Temple, which is maintained by the goldsmith society. The Shri Mallikarjun is located near Saint Narhari Sonar temple. A famous saint narahari Sonar, who was a strong devotee of Lord Shiv, daily worshipped the ‘Shivling’. Lord Vitthal gave him darshan of the Shivling though the idol of himself. It is believed that Lord Vishnu and Lord Shiva had united from that day and therefore Lord Vitthal has possessed ‘Shivling’ on his head as symbol of meeting.

Pandharpur, which is 65 km west of Solapur, is easily connected with all main nearby cities like Pune, Mumbai, Solapur etc through road and railway. As it is a famous pilgrim destination that is visited my numerous tourists from various parts of the country, there is no scarcity for good quality restaurants and hotels in the city. It ensures quality food and comfortable accommodation to the people during their trip to Pandharpur.