A visit to Solapur cannot be completed until you've visited Shri Siddheshwar Temple. The temple, which is situated in the middle of a beautiful lake and is surrounded by water on all sides, is the icon of Solapur. It is a famous pilgrim place not only in Solapur, but also in entire Maharashtra state.

Shri Siddharameshwar, a yogi and an ardent devotee of Shri Mallikarjuna of Srisailam, built Siddheshwar temple. Shri Siddharameshwar was ordered by his Guru to return to Solapur and to consecrate many Shiva lingams, when he was on his way to Srisailam. He obeyed his guru’s order and started his work in Solapur by making this temple. Shri Siddharameshwar had installed 68 Shiva Lingams in total. Shri Siddheshwar, who is considered as one of the six prophets of Lingayat religion, was a great contributor to this religion. People in Solapur believe that birth of this saint caused the prosperity of the city and the deity is capable of blessing the devotees.

Shri Siddheshwar temple is dedicated to Lord Siddheshwar who has other forms as Lord Shiva and Lord Vishnu. Therefore, the idol in the temple signifies the holy incarnation of Lord Vishnu and Lord Shiva who went by the same name. Shri Siddharameshwar himself attained Jeeva Samadhi in Shri Siddheshwar temple and lot of crowds visit here to see his Samadhi. A beautiful shrine dedicated to the saint Nalavatvad is found in the garden. There is also a silver-plated Nandi statue here. Vithoba and Goddes Rukmini temple and temples of various other gods are also situated in this huge temple complex. There are many exquisite engravings inside the temple that will leave the visitors mesmerized. 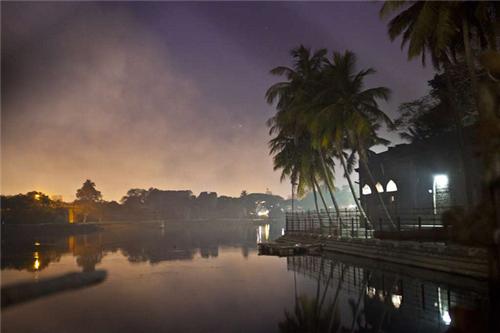 Siddheswar temple is surrounded by a beautiful and large lake called Siddheshwar Lake. Most visitors like to come here during night, when the water reflects the beautifully illuminated temple. It is believed that the lake was created by Sri Siddharameshwar, when all the holy rivers asked for permission to reside in the lake, a legend which makes it really sacred. The lake homes a number of fish and the locals as well as pilgrims consider it holy to feed them. Therefore, you can see many vendors, who sell fish food outside the temple premises. Even though large amount of food is thrown to the lake, it is properly maintained and kept clean.

Other attractions of Siddheshwar temple

There is a series of three gates that provides entry to the inner courtyard of the temple from the road. The Samadhi of the Seer is situated in the center of the courtyard. Another part of the courtyard leads to a well-designed garden and the shrine of Saint Nalavatvad is found in the center of this garden. The image of the sacred bull, which is called Nandi, is located in the ante-Chamber. A stone walled shrine, which is lined with sheets of silver with beautiful engravings on it, can be found on the back wall of the ante-Chamber. The saint used to meditate in the center of the black wall.

The Siddharameshwar trust, which runs the maintenance of the temple, is doing a great job. The trust has a library in the temple where you get books on temple’s history, religions literature and photographs. The most appreciable thing is that the trust does many charitable work,  including investing in public amenities like hospitals, colleges and schools. Trust also raises funds for treatment for cancer patients, who are from financially weak backgrounds. Early morning and evening time is an ideal time to visit Shri Siddheshwar temple, even though gates open from 9 AM onwards. There is enough parking space in the temple compound.

Solapur is well connected by rail and road to all major cities in Maharashtra. As it is just 2 km away from Solapur railway station, the temple is easily accessible by local transport. The plenty of restaurants and various budget hotels near the temple make your food and accommodation comfortable during your trip to Siddheshwar temple.