Akkalkot, which is located at just 35 km away from Solapur, is a famous tourist destination. The main attraction that is visited by numerous tourists every year is Shri Swami Smarth Maharaj Temple. That is why Akkalkot is known as the city of Shree Swami Samarth Maharaj. Lakhs of devotees in Maharashtra and other parts of India visit here to see and worship their deity. 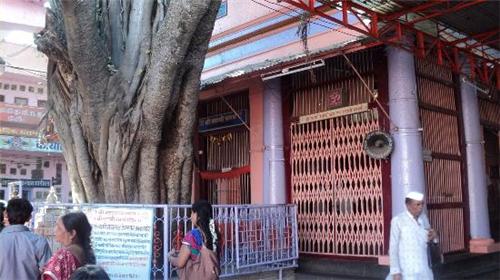 Vatavruksha Mandir (Banyan Tree)
There is a Banyan Tree in Akkalkot under which Shri Samarth Maharaj stayed for about 21 years (1857 to 1878) and now it is a world renounced holy place. People from various classes such as Prince to paupers visited Swami to seek his blessings. Now people can have darshan of his Atma Linga Padhukas, his life size photograph with his original dress and Rudraksha mala and his bed and cot etc in this temple. Thousands of devotees from various parts of the world participate in regular poojas performed here from 5 a. m to 10 p. m.

Shri Swami Samarth Maharaj’s Samadhi Mandir at Cholappa Mutt
Swami Maharaj visited and stayed at Chollappa’s house for some days until the King of Akkalkot Sansthan Shri Maloji Raje started sending money to Cholappa in order to look after Swami. When Cholappa became ready to leave his family for the sake of Swami Maharaj, Swami threw his leather Sandals on him to send him back. We can see the sandals are still kept in Cholappa’s home in Akkalkot and it is taken to be various parts of Maharashtra on procession annually. Other articles, which are used by Swami, also are maintained with great devotion and respect on Cholappa’s house.

Cholappa wished that Swami Maharaja’s mortal should be remained after his Maha Samadhi should be buried in his house. Shri Swami Maharai attained Maha Samadhi in 1878 and his mortal remains were buried in Cholappa’s house as per his wishes. Recently, a Tamil devotee from Mumbai, named Mrs Pushpa Nadar, renovated the Samadhi Mandir and built a beautiful Viman and Gopuram for Swamy’s Samadhi Mandir in South Indian Style. Now, the descendents of Shri Cholappa Maharaj maintain the SamadhiMandir. 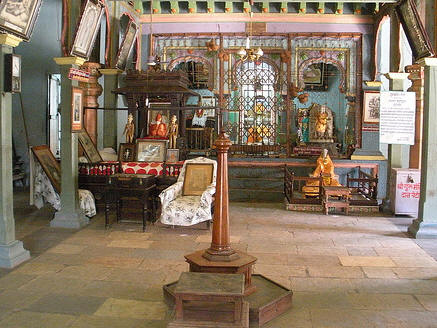 Shri Balappa Maharaj Guru Mandir
Shri Balappa was a strong and sincere disciple of Shjri Swami Maharaj. It is said that one day Swami Maharaj appeared before Shri Balappa physically and consoled him, when he was about to end his life by not even drinking a drop of water after Swami’s Maha Samadhi in 1878. Shri Balappa was convinced and started propagating this supernatural incident to Akkalkot residents and other devotees. Then he established a Mutt by name Guru Mandir where Guru’s padukas, his toys, dresses and other belongings are still maintained. After several years, Shri Balappa attained Samadhi and his mortal remains are here in Guru Mandir. You can also see the Samadhi of Shri Gangadhar Maharaj, the disciple of Shri Balappa Maharaj here.

Shri Gajanan Mahraj was the chief point of this Guru Mandir until 1987. He, who was regarded as the incarnation of Lord Parasuram, gave an impetus to Sanatrana Sharma through propagating ‘Agni Hotram”. He authored several spiritual books and compiled a beautiful Ashtothram (108 names) on Shri Swami Smarth Maharaj. Devotees get Mahaprasad (Full meals) at guru Mandir after noon and night Aarthis at free of cost.

Sheik Nooruddin Baba’s Dargah (Tomb)
The Baba was famous even before 1857 when Swami Samarth Maharaj came to Akkaljkot and his fame had reached beyond all the limits of religions and castes. It is said that Shri Swami Samarth Maharaj used to visit this Dargah and Nooruddin Baba  (in spirit) also visited Swami during mid-night. You can see a Brahmin Boy’s Tomb along with Sheik Noor Baba’s Tomb.

The other important places in Akkalkot include Shri RajeRayan Mutt, The Royal palace, Shri Ram Mandir and Khas Bhag. Akkalkot is just 32 km away from Solapur ST stand and you can get frequent buses from here. Swami Samarth Temple is just 11 km away from railway station at Akkalkot, which is known as Akkalkot road railway station (Kadabgaon). Many commercial vehicles are available to Hindu devotees, who generally visit here at Navratri week. Some trains that run from Solapur to Hyderabad also stop here.