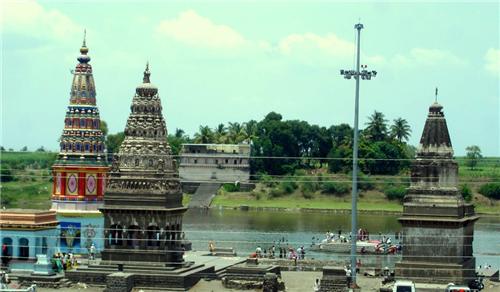 Pandharpur, which is about 65 km away from Solapur is an important pilgrim destination in Mahrashtra. The numerous temples of various Gods and Goddesses in Pandharpur, which are unique with its legends and architecture, attract plenty of tourists every year. As most of the temples are located within a distance of a few kilometers, you may not have to travel long to visit them. October to February is the ideal time for temple visits here. Pandharpur railway station is the nearest railway station to these temples. There is no scarcity for good hotels and restaurants in Pandharpur. Here gives a brief description of the important temples in Pandharpur that will obviously help your Pandharpur visit.

Gopalkrishna Temple
Gopalkrishna Temple is built on a low hill of trap, which is a few hundred yards north to Bhima River. A watercourse called Pushpavati runs north a few hundred yards to meet the Bhima and it is separated from the temple by a road. An open plain with six nandruk trees with mud and stone platforms built on their trunks can be seen on the temple. Large gathering of pilgrims can be found here on the Ashadha (June -July) and Kartika (October – November) full-moons.

Datta Temple
The Datta temple, which homes the black stone image of lord Dattatreya, has a parapet wall built by the last peshwaBajirao in 1796 to 1818.  You can see flag stones on the road along these temples, which is used by pilgrims. Datta Temple is the front or east half of a large building with two quadrangles.

Janabai Temple
Janabai Temple has got chamber that stores the items of Janabai, who spent time devoting herself to the lord. The temple is located to the suth-east of Gopalkrisha temple.

Laxmi Narayan Temple
The Laxmi-Narayan Temple is located in north-west corner behind the Gopalkrishna Temple. The temple houses the idol of Lakshmi Narayan along with the pedestal, which are facing east and can be seen from the door in the east. But, the pair of rock-cut arc is still kept on the original plinth, which is covered with small temple such as construction in brick and mortar closed from three sides.

Bhimakraj Temple
This is located in the same compound to the north of Gopalkrishna temple.If you reduce the ornament and the spire, the Bhimakraj Temple is identical to the Gopalkrisha Temple. The temple homes the chief ling, which has three feet length, two feet breadth and two feet and three inches height. It is covered with a hallow brass mask that represents Bhimakraj, who is the father of Krishna’s wife Rukmini. You can also see a cobra coil that encircles the mask and the open seven-hooded cobra that shades the head.

Narad Temple
Narad Temple, which is a small temple located in the east cloisters facing Gopalkrishna Temple, keep the image of Narada with three feet height and seated cross-legged. 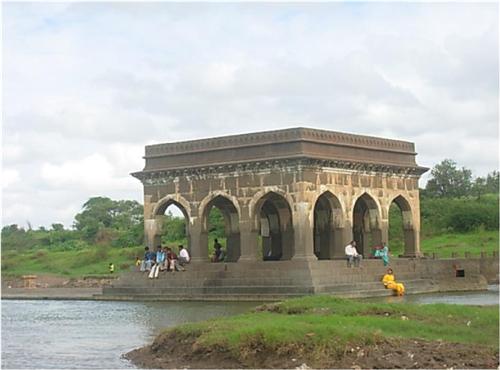 Muralidhar Temple
The Muralidhar Temple, which includes a hall and a shrine, is built of stone and cement. The hall that is made of Masonry has a plaster roof resting on eleven stone pillars and three pilasters. The paved floor has a small stone bull on a pedestal eight inches high in the middle. You can see a small Mahadev in front of the bull. Second PeshwaBajirao built this temple in 1720 to 1740.

Lakhubai Temple
Lakhubai Temple is located on the river-bank in the north of the town of Pandharpur. This masonry building includes a hall and a shrine. The south side of the temple homes a rough image of Maruti that has two feet high coated with red lead. The north side possesses a rough sitting image of Ganapati and the west side has sitting image of Goddess Lakhubai on a stone pedestal.

Tambda Maruti Temple
The Tambda Maruti Temple, which is considered the original Maruti of Pandharpur, is the most popular temple. The temple has a single-roomed masonry building where you can see the idol of Hanuman coated with red lead mixed with oil. It is believed that Ramdas Swami, the religious teacher and guide of Shivaji the Great built this temple in 1627 to 1680.

BeriMahadev Temple
BeriMahadev, which is located on the holy round road about 500 feet to the south- east of Kala Maruti, is a small temple. KshetrapalBeri, a native of Pandharpur, built BeriMahadev temple in about 1785. The real name of the God here is BhardwsharMahadev, but it is generally called after Beri.

BatteshwarMahadev Temple
Batteshwar Mahadev is another temple built in name of Lord Shiva, which was built by Komtis of Pandharpur. The temple is of solid masonry that has a five feet plinth. It possesses an audience hall or Sahamandap.

Takpithya Vithoba Temple
Takpithya Vithobha Temple, which is located in a lane about 225 feet west of the great Vithobha temple, is a mud-roofed temple and is built of stone. It is believed that an old Brahmin widow named Radhabai, who was a strong devotee of Vithoba, built this temple.

Padmavati Temple
Padmavati Temple, which resides in a pond with the same name, is located about half a mile to the west of the town. Sakuvarbai, wife of Yashwantrao Pawar, chief of Dhar, built this temple in 1778.

Lakshmi Temple
Lakshmi Temple, which has four parts including a shrine, an ante-chamber, a mandap and a porch, is located near the Vithoba Temple. This temple has eight feet breadth and six feet depth. It also possesses an althar along its black wall, a white marble image of Lakshmi about two feet high with a brass black. Kavde merchants of Gursala made this temple in 1830.

Trimbakeshwar Temple
This temple, dedicated to Lord Shiva, resides in the north of the temple of Vithoba. Trimbakeshwar Temple has two parts; a hall and a shrine. The hall is a masonry with a flat stone roof that rests on four pillars and eight pilasters.

Panchmukhi Maruti Temple
Panchmukhi Maruti Temple, which is on a plinth two feet high, is dedicated to Lord Hanuman. The top of the temple possesses dome, but no pinnacle. The temple faces west and has a door in the west wall to enter. It has an image of lord that almost fills the entire breadth of the small room. Idol of Lord Hanuman is standing with one foot on the prostrate body of the giant Jambu Mali, the chief gardener of Ravana.

Kalabhairav Temple
Kalabhairava Temple, which is built of stone and mortar, has two parts; an ante-chamber and a shrine. It also has a brick and mortar spire. The temple, which is dedicated to lord Shiva, was built by Brahman Konkane in about 1730.

Shakambhari Temple
It is an old ruined temple, which was set up by one Angal in about 1775. It is believed that Shakambari is the vegetable nourishing goddess and so devotees prepare a dinner in here honor and bring her a plateful with no less than sixty kinds of cooked vegetables.

Vyas Temple
Even though this temple is named after Vyas, the reputed author of Mahabharata, is has a standing image of Maruti with folded hands and besmeared with red lead. The temple of Vyas is on a plinth in the middle of the enclosure and the plinth is three feet higher than the rest of the enclosure and 5.5 feet above the level of the road. A hall and a shrine are the two parts of Vyas Temple.

Chophala Temple
Vishnu Panchayatan or images of Vishnu, Ganapati, Vishnu, Surya and Mahadev are worshipped in Chopala Temple, which was built about 1770 by one Narayan Nakhre of Indapur. When Narayan slept in the temple Vithoba appeared to him in a dream and told him to go and live with a Bavda whom the god named.

Chandrabhaga Temple
Chandrabhaga Temple has a shrine and a front porch and the shrine possesses four small lamp niches; two in front wall and one each in the north and south walls. A meter high statue of a woman carved out of black stone lies high on a plain block of stone, is the idol of Goddess Chnadrabhaga or Ganga. The throne is arch shaped and a pair of padukonas (sandals) placed infront of it. 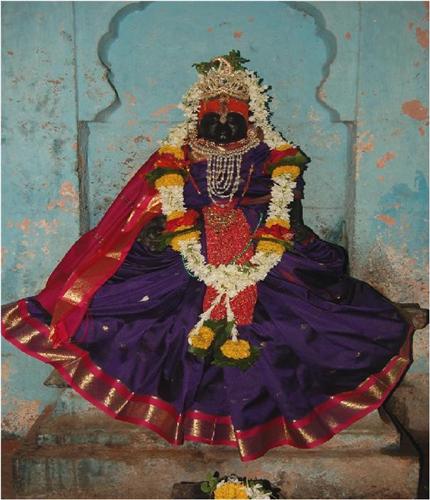 Ramachandra Temple
Ramachandra Temple, which is dedicated to Lord Ram, is strongly built of dressed stone mortar on a plinth six feet high. The temple that has two halls or sabhamandaps and a shrine was built by the famous Ahilyabai Holkar in about 1735 – 1795.

Babhlya Mahadev Temple
It is a small plain temple made of rough stone and is dedicated to Lord Shiva. It possesses a shrine and a porch resting on two high pillars and two pilasters in the front wall. There is an image of Nandi facing the shrine door in the porch.

Ambabai Temple
Ambabai Temple, which faces east, has an ante-chamber and a shrine. This temple is dedicated to Amba and it is believed that one Sidhu Koli built it.

Mallikarjun Temple
Mallikarjun temple, which is dedicated to Lord Shiva, is more important and more largely visited than any other Shiva temple in Pandharpur. Its age and proximity of Vithobha temple are the main reasons for its importance. Even though the temple has a hall and a shrine now, it was originally limited to the shrine that is supposed to be very old. It is said that Narhar, a Lingayat goldsmith and a devotee of Mahadev, repaired and improved this temple. Additions were made nearly in 1820 and the spire was constructed in 1854.