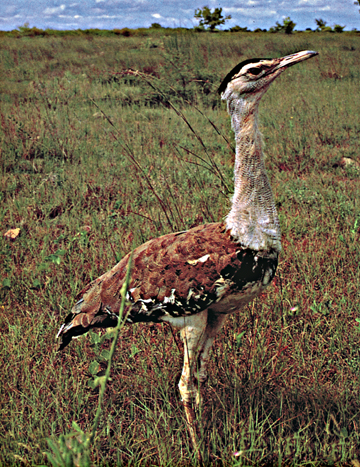 Maharashtra is amongst the six Indian states that homes Great Indian Bustards (Ardeotis nigriceps). Nannaj, 22 km away from Solapur in Maharashtra, homes a sanctuary that is named after the Great Indian Bustard, one of the most endangered species of bird. This sanctuary, established in 1979, is famously called as the Jawaharlal Nehru Bustard Sanctuary.

In former days, the bustard was commonly found in the dry districts of Maharashtra. But, nowadays this bird with a common name ‘maldhok’ is an extremely rare bird. This huge, white and brown bird normally thrives in arid and semi-arid grasslands. While the male bustard is about 122 cm in length, the female is much smaller at around 92 cm.

It is Mr B.S Kulkarni, who identified the Great Indian Bustard at Nannaj and Karmala in 1972.  As a result of his constant efforts, Dr. Salim Ali visited and started a research project here. Mr. Kulkarni, who wrote extensively in local newspapers to make people aware of its existence, is still actively working to protect the bird and its habitat at Nannaj near Solapur.

The Government of Maharashtra declared the Great Indian Bustard Sanctuary in 1979 with an aim of protecting these highly endangered species. This sanctuary, which is sprawled in total area of 8496.44 sq. km, covers the area of North Solapur, Mohol, Madha and Karmala talukas of Solapur district and Karjat, Newassa and Shrigonda talukas of Ahmednagar district.

The Great Indian Bustard Sanctuary is now a tourist hotspot in the district of Solapur and it is identified as an international tourist centre. Besides the Great Indian Bustard, some other species of birds like Indian Courser, Chestnust-bellied Sandgrouse, Southern grey Shrike, Eurasian Thick-knee, Bay-backed Shrike, Qualis, Indian Bush Lark, Partridges, Bonneli’s Eagle and many Blackbucks can be seen here. The sanctuary also homes several other kinds of animals like the common Mongoose, the Indian Fox, the Blackbuck, the Hyena and the wolf within the precincts.

Nannaj, which is located 22 km away from Solapur, is well connected by roads and rails to other parts of the country. Pune airport is the nearest airport to the sanctuary. The sanctuary homes a forest guest house, which has limited accommodation facilities. So, you are advisable to arrange stay options in Solapur town. Entry permits to the Great Indian Bustard Sanctuary is available from forest office in Nannaj and the park opens everyday from 7.00 am to 6.00 pm.