The Visnupada Temple, which is nearly a kilometer south of the Pundalik Temple, is one of the most renowned pilgrim and tourist place and is visited by several pilgrims every year. This temple resides on the bank of the River Chandrabhaga and is connected by a causeway to the shore. Vishnupad Temple with its own majestic environment is the top-notch attraction not only in Pandharpur but also in Solapur district.

Attractions at the Vishnupad Temple

The shape of the shrine is like a large hall with large sixteen pillars supporting the ceiling. Several postures of Lord Krishna and Lord Vishnu are portrayed on the pillars. 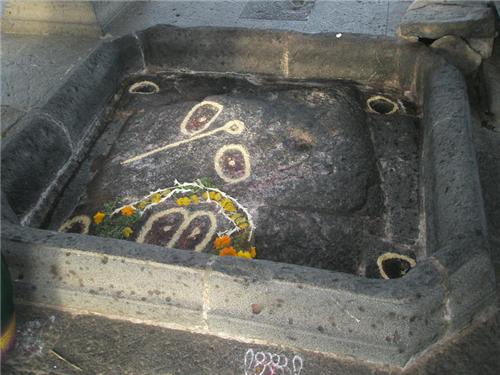 As Vishnupad Temple is located in middle of the river, the footsteps gets partially submerged in water, when the water level rising during the monsoon. Sometimes, the whole temple is under water for about three months during heavy rains. The main festival conducted in Vishnupad Temple is in the month of Margashirsha. On the first day of Margashirsha the sandals of Vitthal are taken to Vishnupad Temple and the last day of the same month the chariot of Lord Vitthal is brought to this temple in a grand procession. Vishnupad temple is also famous for another ritual ‘Shraddha’ in which the pilgrims perform funeral rites for their departed relatives and remember their ancestor.

Vishnupad Temple is just 4 km away from Pandharpur railway station, so you can easily reach to the temple. The city also home many lodging and other accommodation facilities near the temple.