Solapur, a typical Maharashtrian village renowned for temples and valiant fort, provides a calm and quiet ambience to the tourists from all parts of the world. It is the largest city in Southern Maharashtra and the 4th largest city in the entire Maharashtra. The city, which lies in the border of Karnataka, is the 30th most populous city in the country. The Solapur district is surrounded by Osmanabad, Ahmednagar, Gulbarga, Sangli, Bijapur, Satara and Pune. The district is well connected to all the neighboring districts. 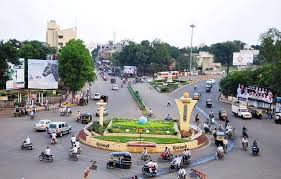 It is the Solapur Mucicipal Corporation, which was established in 1964, manage the civic administration of Solapur city. Overseeing and managing the engineering works, sanitation, health, transportation, water supply, administration and tax in the city is the responsibility of Municipal Corporation. The city is divided into 6 zones and 125 wards. The electrical supply to the city is done by Maharashtra State Electricity Distribution Company Limited.

Solapur is famous for its mattresses, powerloom, handloom and beedi industries. There are many units of cotton material products in the city. Solapur is famous in producing cotton dhotis and military tents. Once, this land was called as the city of cotton production. The bedding accessories, Solapur chadars and towels are world-famous. You can also see many oil seeds factories and beedi factories in Solapur. The other main area of revenue of the city is tourism. As Solapur homes several world famous temples such as Vithobha temple, Siddheshwar temple, dargahs, mosques and samadhis, numerous pilgrims visit this city every year. Read More............................

Solapur homes several private hospitals, nursing homes, dental hospitals, eye hospitals that provide excellent service to the people. You can also find out ayurvedic and homeopathy treatment facilities in the city. Many of the hospitals have their own blood banks and ambulance services that are helpful in emergency situations. The police stations and fire stations in Solapur function very effectively with the aim of protecting the life and rights of people. People don’t face difficulty to get other services like banks, ATM, courier, parcel, travel agencies, event management etc, as most the popular service providers in these categories function in Solapur. Read More....................

As Solapur is a developing city, you can also see a change in the lifestyle of people here. The city is home for several gyms, health clubs, fitness centers and beauty parlors that are well equipped with modern facilities, advanced technologies and experienced professionals in the particular fields.

Connectivity With Other Cities

Solapur city is well connected with major cities of Maharashtra by roads. There are train routes to the city from Hyderabad and Mumbai and several trains come and go from the Solapur railway station to various parts of the state and the country. Solapur also home Solapur Air Port that provides comfortable journey to people by air. State Transport and private tour companies offer different shuttle services that help travelers to reach Solapur comfortably as well as economically.